On October 19th, Kaunas mosque held its Open Doors Day followed by the launch of the Citytelling Festival presented by Kaunas 2022 programme Memory Office. From 11 a.m. to 3 p.m. the Mosque opened its doors to public, welcoming everyone who wished to see the mosque and hear about its history from the local community members.
After four years of break, this event attracted a staggering number of visitors that the community itself did not expect – around 200 people visited the mosque that day! Since the morning the flow of visitors was constantly changing. Everyone had a chance to watch a ten-minute documentary movie about the history of the mosque and its territory (You can watch the video in Lithuanian language), to get a closer look at the tradition cherished by the Muslims community – to listen to the recitation of the Qur’an in Arabic language by heart. Such religious heritage, based on the tradition of Prophet Muhammed ﷺ, is continuously given from generation to generation and is being practiced all the world until today.
After introduction of the tradition of reading the Quran, it was time for Zuhr prayer. Everyone could hear an adhan – a call to the prayer which made everyone stand still and listen. While Muslims performed the prayer, visitors had a possibility to see and hear how God is worshipped in Islam. In everyday life, Muslims perform their prayers five times a day, and the prayer language is Arabic and native. 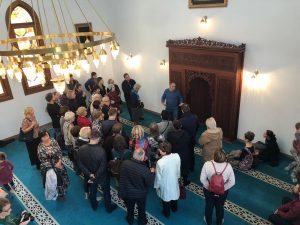 The Community gives a sincere thanks to Citytelling festival coordinators Daiva Citvarienė ir Justina Petrolionytė, to LMRBT-Muftiate mufti A. Beganskas, who thoroughly presented the history of the Kaunas city Muslims community and patiently answered the questions from the visitors.
The community also expresses its sincere gratitude to the madame Liusia Gaidukevičinė, who introduced the Tartar culture and their preserved heritage in Lithuania. (Link: Lithuanian Tartar House Museum). It is a huge contribution to our Lithuanian history! Also to all other volunteers who kindly contributed to this event. May God grant them health and blessings.

We ask Allah to reward the best of all who have contributed to the preparation of this event and to accept the good deeds from them and increase their blessings.