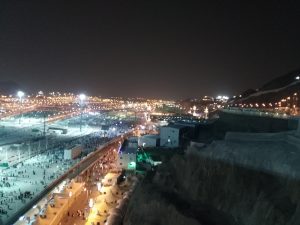 Since we arrived we didn‘t have any special instructor or a guide who would advise us during the hajj, so we were absolutely sure that our Sunni Muslim group was a minority and we are linked up with Shiites Muslim pilgrims from all over the world. This imam couldn‘t be our hajj guide because of religious practice differences. Also our residing place was fitted for Shiites pilgrims with a different place for a prayer according to their requirements. During few days here came Shiites mules, imams and other ordinary believers from Iran, Denmark, Sweden, Kuwait, Saudi Arabia… Because of this unfair situation we felt really bad. It touched our religious beliefs and showed what kind of situation is in Lithuania and whom we are cooperating with when searching for a help to make a hajj from Lithuania.

Shortly after, two couples from England a doctor with his wife, taxi driver with his wife and elderly Somali with her son from Nederland joined us. His responsibility was to help his mother make a pilgrimage trip so he was driving her in a wheelchair during the hajj. All of these people faced an unfair broker for a hajj trip too. Since the day we met, our group was holding together all the time. We looked and took care for each other. If one of us would stay behind during the trip, we would stop and wait. We would consult each other and everything we did was strategic and thoughtful.

Our trials aren’t over yet. We found out that agency, through which we came to Makkah, hasn’t ordered any places in a tent village in Mina during the hajj so they had to find it very fast. They managed to do it in the last minute booking some places from British agency “Flight Express”. When time for fajr prayer came, a small van for pilgrims came to dormitory. So we hurried up to make a ghusl, went to the state of ihram and walked downstairs. This van took us to the tent village in Mina, where we found a new group. We were given special bracelets which every pilgrim must wear during the hajj. Unfortunately, our bracelets were registered by other people names… By this we completely lost our identity (pilgrim‘s passports are taken away by the hajj ministry personnel when entering country).

45 degrees Celsius outside. Air conditioning in a small room is not working properly. However every pilgrim has an aim to get some rest before the trip to the Arafat valley. During the waiting period we glorified our Lord, supplicated only to Him. The purpose of this time was glorification, so everyone tried to remain patient and helpful even while being very tired – the situation wasn’t very good for anybody. Public toilets and showers were full of people and didn’t match hygiene requirements. A lot of pilgrims were fainting, falling – emergency would come and take them. For elderly it wasn’t easy either. The Somali from our group got missing in a pettiness of the tents. After some time we suddenly found her lost and frightened. It looked like we won’t finish the pilgrim trip either, but the short English lectures of our group guide reminded the goal of our journey. So we accumulated our strength and asked Allah to help us. When time for fajr came we moved to the valley of Arafat right away.

The day of Arafat (9th day of dhull hija month)

The valley of Arafat

As soon as we arrived to our destination we hid ourselves from the sun heat in a tent. Adding to that, on every corner there was an air conditioner. Everybody tried to find some free space and keep calm doing a lot of dua (supplication) and dhikr (Lord glorifying words).

Old Somali lady from our group again had an unpleasant incident in the valley of Arafat – she got her wheelchair stolen and her legs were so much bloated that it was scary what would happen if she had to walk on her foot… We tried to find who can sell a wheelchair but at the end it was donated by the same British agency which felt responsible for the stolen wheelchair. Here we found a lot of other people who were in the same situation as we when sum of paid money and described conditions didn’t match the reality… It was sad to see how Muslims are being cheated by other Muslims. This affects a heart and trust of a believer.

When midday came, we prayed dhuhr and asr prayers combined and when time for maghrib was coming we had to go to Muzdalifah.  But we found out that leaving this place wasn’t so easy. We managed to do it only after a midnight when we begged to jump into penultimate bus of the British agency and moved to Muzdalifah. 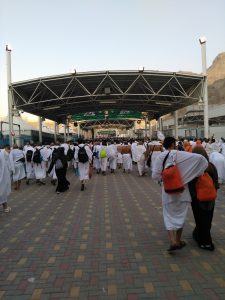 Muzdalifah is literally a desert under the open sky. Here we collected necessary amount of stones to make another ritual. After that we put a softest rug, took something comfortable under our heads and tried to get some sleep (at this time sleep is necessary if one doesn’t want to get over tired and lose all his strength). In the Muzdalifah we didn’t stay for long, when we came here only 1-2 hours was left until fajr prayer. At this time you don’t think about comfort, but you ponder about your abilities and further trials. After the prayer with some other pilgrims we moved to Mina. There were a lot of people on the road. We moved by faster place and at about 8 a.m. we were next to Mina, where we made the last ritual – throwing pebbles at concrete pillars (jamarat).

Everything was going on very well but suddenly hajj supervisors blocked the road so we had to choose other route. We didn’t imagine where to go. We saw that others got lost and couldn’t find their guides. Quarrels with supervisors and throngs began. We walked a little bit away from the people and recognized that the place where not so far away from our dormitory. We decided to go back to it and partly went out of the state of ihram. In the morning of the next day we went to the mosque of Haram to make a tawaf around the Kaaba. After dhuhr prayer we moved to the valley of Mina to throw pebbles at three jamarats for a second time.

In the evening of the same day we met imam of Forty Tatar Village and chief of Klaipeda Muslim community to talk about our situation. They came to make hajj by WAMY program. These places are being nominated for several years by LMSDC-Muftiate. Leaders of WAMY (World Assembly of Muslims Youth) organization invited us to participate in their educational programs and join the lectures in the evenings. We joined it with pleasure and find out new fatwa which says that if a hotel is in Mina (i.e. Al Azizya district) it is not necessary to go back to the tent in Mina and sleep there – you can spend a half of the night in Mina while walking and collecting pebbles or just sit and wait somewhere and the rest part of the night you can stay at hotel and this will be like spending all night in Mina. Our dormitory was in the same district so we did what was said.

To our surprise when hajj finished executives of WAMY organization suggested to leave Shiites dormitory and spend rest of the days in Makkah at their luxurious five star hotel Dar Salah with food in the room for free. This was a fantastic present after hajj and a great relaxation. Alhamulillah.

Suggestions for those going to hajj or what we would do differently:

1) While preparing to hajj or umrah it is very important to inquire about hajj trip organizing agency – you should consider not only its accreditation but reliability, feedback, given conditions during the trip and alike. We recommend calling straight to the embassy of KSA in Denmark and asking the list of accredited agencies. By doing this you will be sure that you won’t end up with mediators or resellers. If you get any doubts while interacting with any company then better you give up cooperation with it.

2) Before you set off make a photocopy of the passport. If you get in the hands of unfair mediators you may lose your identity – pilgrim’s passports are collected by hajj ministry workers when entering country are so you won’t have any proof of your identity. Passports are given back the same day you leave the country.

3) If you ended up with unfair mediator film and take photos of everything. When you will arrive to Lithuania every proofs and names of the persons involved in this dishonest process can be sent to hajj ministry through KSA embassy in Denmark.

4) Because of frequent change of temperature and strong air conditioning body becomes exhausted and tired so it is necessary to drink a lot of warm black tea and water with salt.

5) You don’t need to be suspicious about flavors in soap. They are supposed to make you clean, not to perfume. So you can fearlessly wash your hands and clothes if needed with intention of being clean.

When the process of hajj begins i.e. 8th day of dhull hija month when traveling to Mina you need to be prepared. What should you take with yourself?